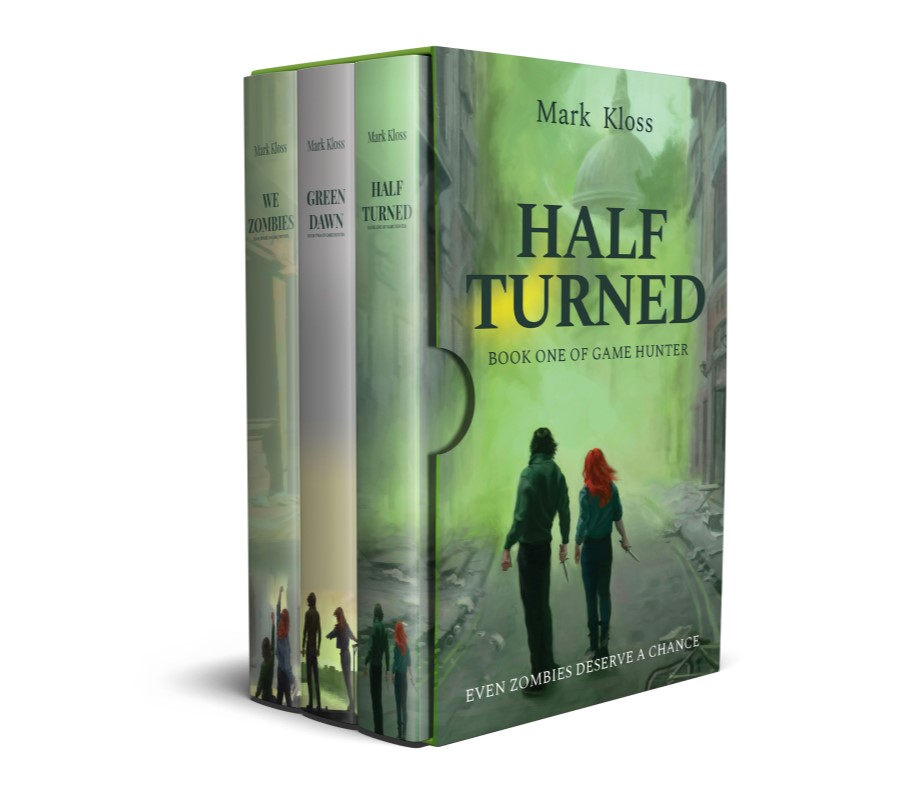 In honour of the Game Hunter series, I want to share with you the reasons and emotions that fuelled my inspiration and drove my desire to write an action-packed, humorous trilogy that even had time for some touching romance.

In the 2000s zombie books and films achieved a resurgence. For me, two of the zombie films I watched summoned up the way the story generally went: the thrilling ‘28 Days Later’ and the humorous ‘Shaun of the Dead.’ That first film showed zombies to be fast, furious and extremely dangerous. The second film depicted them as slow, lumbering and easy to kill. When it came to define the zombie, films and books mainly kept close to the above and they nearly always looked grotesque.

Of course, there needs to be fear and a lot of excitement for those watching the film or reading the book. Otherwise what’s the point? But why are zombies always the bad guys? So, I thought it was time to introduce a third category: the zombie hero.

Yes, I built my story around fully turned zombies, but more so on half-turned zombies. Neither are in an immediate state of hell. Rather they are on a fast or slow deteriorating journey down to the place we imagine hell would look like.

As you know, the general theme is that zombies are evil, driven by endless hunger, without heart or soul and need to be killed or at least escaped from. That was until the book, ‘Warm Bodies,’ got turned into a movie and brought a different perspective to a wider audience. The hero and the rest of the zombies aren’t nearly so cartoonishly grotesque and still had buried feelings and internal thoughts.

I loved the whole concept and it was a best-selling book as well as a successful film. I decided although my hero characters were dangerous killers, they were only half zombified, with feelings, courage (which they would need plenty of), a sense of humour and even a touch of romance!

‘Prison planet’ has been a phrase I’ve come across a few times and it stuck in my head as a powerful phrase.

I often enjoy wandering through the old streets of the City of London (the small historic yet powerful financial district within London). I study the many ancient buildings, churches, castles and cobbled streets.

As well as admiring these impressive historic sites that defy time, I constantly receive strong feelings of the past life experienced by the many and varied people who lived in this city over the last thousand years. Throughout the ages, people have experienced death through plague, sickness or murder and even dark intrigue and historical mischief from the few desperate for power. Yet mainly life is filled with the joys of living.

As nowadays it is always busy with commerce and tourists, I came to imagine how it would be mostly deserted. That painted a very different picture with danger lurking in every narrow ally and behind the moody, silently watching buildings; especially when night returns.

From all the above grew the idea and desire to use ‘The Prison City of London,’ as a large and detailed backdrop for my trapped zombie heroes.

I find people get confused with thinking there’s no difference between their inner self and their body. This gives the idea that if the body is ugly on the outside they must also be so on the inside.

In my world, zombie-ism is another affliction causing a terrible disability of mind and body. Those not affected should count themselves fortunate and at least try to help the zombies, as they would a wounded or sick person or animal that had previously been harmless and sane.

Unfortunately, there are many examples of us humans being frightened into fighting or trying to destroy what we don’t like or can’t understand. In this series, we view the totally turned or half-turned zombies as an underprivileged minority and the bad guys are people beyond the City who pay to play in a televised reality game show of hunting, killing and scalping zombies.

As zombies are sick human beings, they also have heroes, cowards and villains, with a whole lot in between. My half-zombies are heroes, strong and confident in the art of dealing out death. As I mentioned, they also have heart and soul and can think and communicate. Trapped inside the Prison City of London by an all-powerful electronic forcefield, they fight the good fight for their own lives and the fully mutated, until a cure can be found.

This book is exciting, adventurous, dark, sometimes light-hearted and, believe it or not, has moments of touching romance too. However, it also has a message that those we don’t understand still have a heart and a soul and are entitled to their rights.

I hope you’ve enjoyed this brief insight into my inspirations for writing Game Hunter and will follow me and my zombies into the adventure that awaits.